MotorsportDays LIVE is excited to be heading back to Silverstone for Europe’s largest on-track motorsport exhibition on 4th and 5th November. Not only will the show feature static exhibits from across the motorsport spectrum, but guests will be able to take to the track in some of the world’s most exciting cars.

The circuit has seen many iterations over the years, most recently the implementation of “The Loop” section in 2010.

One driver who has a wealth of experience competing at Silverstone is Richard Morris. The British driver first attended MotorsportDays LIVE with Racing Pride, a movement which he co-founded, in 2019. Two years later, he first got behind the wheel of a Revolution prototype at the show. Having secured the contract at the show, Morris has since competed in the 2022 Sports Prototype Cup and also won races at Silverstone driving a Praga in 2021.

In 2020, Morris also drove for Spire Sports Cars as a factory driver in the Sports 1000 championship, where he claimed victory at the round held at Silverstone.

As a multiple winner at Silverstone, with experience in three different cars that are all on show at this year’s event, there’s few drivers better placed than Morris to describe a hot lap.

“Silverstone is an incredible circuit and perfect for MotorsportDays LIVE. Even on the shorter International configuration, there is a mix of technical and high-speed sections which give a solid impression of what each car is capable of.”

“Coming out of Club corner, you’ll be in fourth gear in most cars. Onto the Hamilton Straight into top gear as you approach Abbey. There’ll be a kerb on the left-hand side. Some choose a wheel on that kerb, others just the white line. In cars like the Spire, you want to brake and go down one gear. If you’re in a prototype like the Praga or Revolution you can turn in and trace the brake towards the apex.

“Down a gear, it’s a very quick corner trying to kiss the apex and back on the throttle as quickly as you can, letting the car run out towards the left kerb and if you have the grip leave some margin on the left-hand side to open up Farm Curve.”

“Farm is a flat-out left-hander. In a sports car, you might need a small lift off the throttle to get the car turned in but, in a prototype, it would be flat out. The important thing is to wrap around Farm Curve to be on the left-hand side on the approach to Village corner.”

“For many cars, the start of the outside entry kerb is about the right braking point, perhaps a bit later in a prototype. Many cars will be in top gear, so the approach is very fast, then come down to second gear for Village. It’s important to wrap around the exit of Village to get round to the right-hand side of the track for the entry to The Link.”

“Unlike many of the races you watch on TV, don’t be tempted to turn left onto Aintree and the Wellington Straight!  The next corner on the Silverstone International Circuit is The Link. You can sometimes carry it flat out, but in many cases, it requires a lift to negotiate the corner to get the best entry into Becketts.”

“Brake for Becketts and shift down to second gear, turning in earlier than you might think to get a good position on the apex curve. Looking to get on the power as early as possible onto the Hangar Straight, which is where you can enjoy the top speed of your car and get up to top gear.”

“Stowe corner comes up fast, the kerbing on the left is the rough braking point in many cars give or take. Down to fourth gear and getting the nose in is important for Stowe. It’s one of those corners where you have to balance putting the throttle on, as you’re on the edge when you feed the throttle. Use some of the exit kerbs, but be careful of the jaws if you run too wide.”

“Approaching Vale, you want to place the car on the right-hand side of the track, that’s also where the pit entry is. Go beyond the pit entry, up a gear, before braking at the kerb on the outside. Down three gears, and get the nose into Vale. Try to wrap around the apex to place yourself in the middle of the track and open up the final corner of Club. 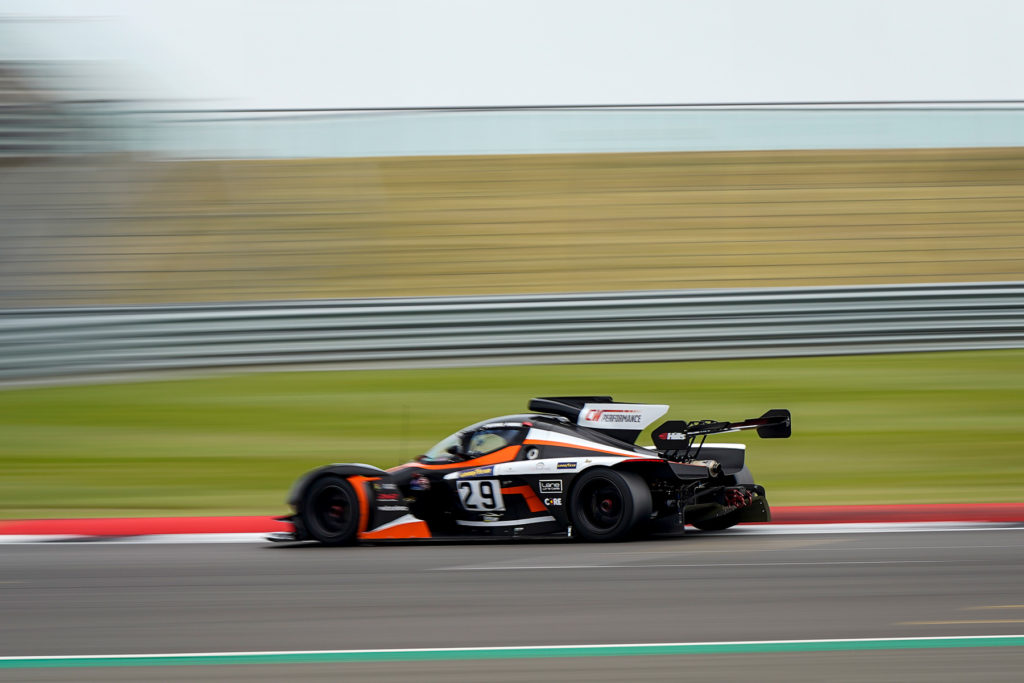 “Power on as early as possible, but be patient as the car tries to break traction. The final apex will be flat out for many cars as there is plenty of grip on the exit.”

Free tickets for MotorsportDays LIVE 2022 on 4th and 5th November are available via this link. Please book test drives directly with the manufacturer.

In addition to being an expert on the Silverstone circuit, Morris is also a big fan of the MotorsportDays LIVE format: “It’s a really interesting show to go and see all the different teams and manufacturers and it’s great to get the chance to try the car, which gives you a good feeling and impression. It also allows you to meet the teams, work with the car and see if it’s a good match for you. I would recommend it to any driver.”